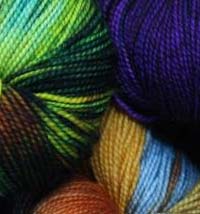 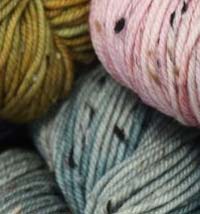 Luscious, lovely handpainted yarns from a father and son family business in the Northeast, Meadowcroft Dyeworks creates amazing color palettes that stand alone in the indy dye world. Experience and explore the yarns painted by this incredible company.

Always interested in making things, Dave Burrows first learned to knit from his grandfather, who in turn had learned from his father, a blacksmith and wheelwright who emigrated from Wales to mine coal. Dave’s training is in art education, and he worked as a potter for much of his adult life. Since retiring from pottery, he has worked as an electrician, a bookseller, and now as a dyer. In addition to fiber work, he enjoys collecting and refurbishing mid-century modern furniture, lamps, and glassware.

Dave's son Will’s education is in philosophy and theology, but he has been making art since childhood. Around age six or seven, he received lessons in basic color theory from his dad at an Italian restaurant where they put crayons at every table. He enjoys printmaking, woodwork, painting, and photography as well as digital collage and found objects. An exchange student we hosted years ago called him a “stuff-maker from garbages.” Much of his work is theological in nature, and he has designed several pieces for liturgical use.

The Meadowcroft name is borrowed from an archaeological site near their homeplace southwest of Pittsburgh, Pennsylvania. With artifacts dating back 16,000 years or more, the Meadowcroft Rockshelter in Cross Creek, PA, is the oldest site continuously inhabited by human beings yet discovered in North America. We both have a longtime interest in archaeology and once made a month-long road trip to visit ruin sites in the Yucatan.